These pages are intended to enhance your understanding of codes and ciphers as used by radio characters such as Captain Midnight. We begin with an article by Stephen A. Kallis, Jr. whose has written extensively on this subject. In addition Steve is an expert on Captain Midnight having written a book as biography of the 1940's and 50's hero called Radio's Captain Midnight and published by McFarland.

In the opinion of one of the greatest cryptologists of all time, William F. Friedman, the invention of writing formed the true beginning of civilization. But not too long after writing really got established, various people found a need for writing that could only be read by an intended recipient, but not anyone else.

There were (and are) many ways to conceal writing. There are actually two separate methods generally used for messages: codes, which use symbols or groups of letters to represent words or phrases, and ciphers, where one letter is replaced with another by a either simple or a complex scheme. To those who aren't cryptologists, both codes and ciphers are usually referred to as codes.

Codes, as used in sending messages, may be an easy collection of letters, such as the non-secret SOS, meaning, "I am in difficulty and am requesting assistance." For more complex messages, both the sender and recipient have Code Books. These are listings of letter combinations and what they mean. The sender uses phrases that when strung together comprise the intended message. The recipient checks out the letter groups, and translates them to the phrases, recovering the message.

In the late 19th and earlier 20th Centuries, there were Code Books created because telegram messages were charged by the word. As many as ten characters in a grouping were considered a word by the telegraph companies. Commercial Code Books, such as the Acme Code Words, or the Bentley's Complete Phrase Code were available to companies, enabling them to send complex messages in only a few "words." For instance, if someone used a Bentley's, he or she might choose the following letter groupings:

Thus, the message, DIZUHDAELF FEAVORIGUB KUKIBCUGYA OKGAPICSCO, four "words," would translate to, "Contracts for computing equipment have been signed [in] New York. Commence production immediately." This would be in place of 12 normal words (13 if the implied "in" is included); a savings of at least 75 percent. Of course, for someone without the Code Book, the message would be unreadable, but the message was sent primarily for economy, not security.

However, there were also Code Books used for security. Both military and diplomatic organizations employed these routinely. At least until World War II, Code Books have been considered a very secure means of transmitting messages. However, there are disadvantages with using Code Books. One is that they're relatively bulky, and thus are more difficult to guard than, say, pocket-sized items. Another is that they're easily compromised. If a code book is stolen and photographed or otherwise copied, and then replaced before anyone knows it was missing, then whoever did so will be able to decrypt any message. Code books have been made obsolete as ciphering technology has evolved.

Ciphers have been in use since at least Ancient Rome, and there are indications in ancient writings that they were in use earlier than that. Julius Caesar developed a very elementary cipher, but it seemed to serve him well. What he did was replace every letter in the alphabet with one three places down in position. In this scheme, a=D, b=E, c=F, etc.; thus, "code" would be represented by FRGH. To regain the original message, the recipient just reverses the process. Because of who authored it, the process is called a "Caesar Substitution" cipher. 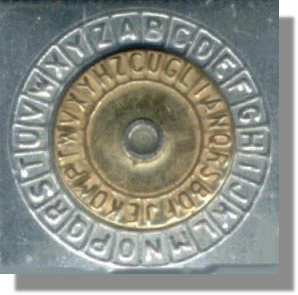 substitution ciphers and started a more complex form, known as "polyalphabetic substitution," which is the key to modern methods. What Alberti did was to invent the Cipher Disk.

A Cipher Disk consists of two concentric circular scales, usually both of letters, but one possibly of numbers, with the inner scale on a rotatable disk. This meant that the two scales could be repositioned with respect to each other. If the two disks were both the standard alphabet, and the second alphabet was moved three places over, the result would be the Caesar Substitution. But the two alphabets could be positioned at any of 26 relationships (practically, 25, since one of the positions would result in the "ciphered" message being the same as the original (called "plaintext" by cryptologists). A number of so-called "decoder" devices use a cipher disk as a simple substitution device.

Simple substitution ciphers, though, are relatively easy to crack (cryptanalyze). Since each character in the cipher represents the same letter, the use of statistics can help determine the most likely letters in a message. For example, it's known that the most-used letter in the English language is "e," so by counting all the letters in a message and determining which is the most used character would mean that it might be an "e." In addition to statistics, there are other ways to determine which letters are probably in a message: for instance, every word has a vowel of some sort in it, and so one-letter words are almost certainly vowels ("a" or "i").

This makes it much harder to cryptanalyze the message, since neither simple statistics nor single- or two-letter words would help as much in a vowel hunt. This polyalphabetic substitution scheme, and other, more complex forms than Alberti developed, form the basis of modern high-security cryptological messaging. (Thomas Jefferson invented one that was more than a century ahead of its time (see left); although forgotten, it was reinvented in time for use in World Wars I and II).

By the 19th Century, polyalphabetic substitution ciphers had evolved. Particularly for battlefield and espionage activities, it was desirable to have a small, easily concealed, device to encipher and decipher messages, and here the cipher disk and some pencil-and-paper schemes developed into Field Cipher devices. Field Ciphers were not intended to be as secure as those between military bases and diplomatic missions, but if they could prevent an adversary from decrypting a message until it was too late, they served their purpose.

In 1867, Charles Wheatstone displayed what he called a Cryptograph. This was a primitive automated Cipher Disk, using two "hands" like those on a clock -- one long and the other short -- connected by gears, used for polyalphabetic messages. The arrangement incremented the smaller hand so that when the larger hand pointed to a letter, the smaller hand would point to its cipher equivalent, which would of course change at each following instance because of the way the gears were arranged.

By World War I, the major powers had extensive cryptological organizations. Possibly the best-known cryptological event of World War I was the Zimmermann Telegram incident. Throughout much of the war, the United States was uninvolved. Although sentiment in the United States had increasingly turned against Germany, to the point where the United States had broken off diplomatic relations, it still remained at peace. The British decrypted a telegram sent by the German Foreign Minister, Arthur Zimmerman, that proposed an alliance with Mexico: if the United States might enter the war, and if Mexico joined in the conflict, Germany would help them gain Texas, New Mexico, and Arizona, once Mexican territory. This decrypted message, attributed to American codebreakers, was released through the country's newspapers, and shortly thereafter resulted in the United States entering the war.

During the war, the United States' War Department founded MI-8, a cryptological group, which deciphered messages during and after the war. By reading enciphered Japanese diplomatic communications in the ensuing peace negotiations, the United States gained a decided advantage in bargaining. When it was later suddenly disbanded by the Secretary of State, who idealistically proclaimed that "Gentlemen shouldn't read each other's mail," the head of MI-8, a talented cryptologist named Herbert O. Yardley, wrote a highly popular and sensational book, The American Black Chamber, detailing the activities of the former group.

World War II employed highly sophisticated ciphers and even more sophisticated cryptanalysis. The Germans had adopted a commercial cipher machine, the Enigma, to military and diplomatic use for messages of the highest security. The machine used multiple rotors with electrical connections to scramble letter substitutions in a highly complex fashion. It had been claimed that to crack the Enigma cipher would take thousands of years at a minimum, and mathematics were presented to substantiate the claim. The Japanese also adopted an Enigma machine variant for its highest cipher messages, as well. However, teams both in Britain and the United States independently began to tackle means of cracking the ciphers.

The British concentrated on the German messages. Building on Enigma-machine components smuggled from the Continent, plus a great deal of inventiveness on the part of the British team, which was located at Bletchley Park in England, the Enigma messages started to be read. Such messages (and the related cipher machines) were designated ULTRA.

The United States, under the directorship of William F. Friedman, one of history's greatest cryptologists, concentrated on the equivalent Japanese system, and cracked their messages. The highest-security cipher messages were designated PURPLE, and the related cipher machine was labeled MAGIC. Cryptanalysis had a significant impact on the war. ULTRA and PURPLE decrypts assisted the Allies in World War II in battle strategies.

Decryption of a lower-level Japanese cipher (designated RED) enabled the United States Navy to prevail at the Battle of Midway. Decryption of a PURPLE message enabled U. S. Air Corps personnel to locate and shoot down Admiral Yamamoto, who was flying to inspect some troops. ULTRA decrypts enabled Allies to intercept and destroy German submarines, a clear reversal to the situation when the war began. ULTRA intercepts helped Field Marshal Montgomery defeat Rommel at El Alamein. General Eisenhower indicated that ULTRA played a decisive role in the European theater. During the war, even more sophisticated cipher development took place. 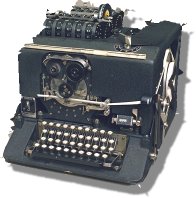 The Bletchley Park researchers developed COLOSSUS, an electronic device, which was a primitive beginning of electronic computers. Developed before the invention of transistors, the COLOSSUS device is considered a milestone in the development of today's computers. Also, William Friedman's group, in particular Frank B. Rowlett, developed a machine similar to, but more flexible than the Enigma device. Called SIGABA (see left), the machine was so successful that during the war, the German cryptanalysts gave up on even recording their intercepts of the messages. They found it impregnable.

After World War II, cryptological research and development didn't cease. The development of the electronic computer led to more complex enciphering schemes than were practical using mechanical components. The newer developments helped both in developing newer, more secure, means of communication, and newer, and more sophisticated ways of cracking secret messages. This has carried through the Cold War to the present day.